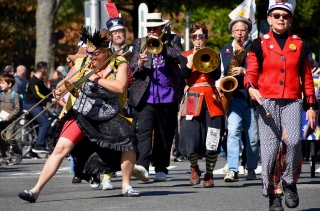 LMB was invited to join HONK! 2022 in Somerville, Massachusetts, Oct. 7-9. They played two sets in Davis Square on Saturday and took part in the HONK! Parade from Davis Square to Harvard Square in Cambridge on Sunday. Some band members also joined in the Friday night festivities.

LMB played crowd favorites and some new songs during their first set on Saturday in Davis Square.

LMB played a second set Saturday evening, Oct. 8, at the junction of Chestnut and Grove Streets.

LMB played two sets during HONK! 2022 in Somerville, Massachusetts, on Saturday. These were taken by guest trombonist Liz who joined us from Western Massachusetts. The setting was Statue Park in Davis Square.

Launching the new website! Thanks to the band and contributors who helped with lift off.